China: Beijing to Yinchuan, to Xi’an and Piangyao

We flew into Xi’an  and were greeted by “The Botwins”  sign held by our new guide Julie and her driver. A bit more expensive to have guides, but worth every penny!

Off to our Hotel Xi’an Tang Dynasty. 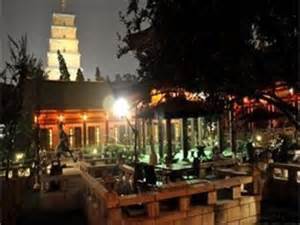 Another lovely courtyard hotel with the added advantage of being centered in the middle of the Old Town. The white, 6th century 12 story Pagoda, the Great Goose, stands just behind the hotel. The monk who officiated at the Pagoda translated  hundreds of scriptures from Sanskrit into Chinese.

Since it was after 5, we told Julie we wanted to walk around the Old Town and find our own dinner. Our bedroom opened onto a private patio, a very old but extremely well designed complex. The courtyard was centered by this miniature Pagoda.

You had to pass it going out  and coming in……not a hardship!

We walked to the Town Square and were delighted with all the early evening activity.

People on one side dancing to music while on the other was a group doing Chinese calisthenics and all around were small groups drinking and conversing.  Very friendly people.

We also got an occasional smile and nod. Julie had recommended a restaurant in a modern shopping mall called “Make My Day”. Irresistible.

Mike ordered some bottled water…and the waiter apologized  for his poor English. Mike said “I was speaking Chinese!”  The waiter answered  “ Oh, I didn’t expect you to speak Chinese so I didn’t understand it.” We hadn’t thought of that aspect.

The next morning, off to Jade Valley Winery.

The winery was built on a hill across from the village and facing the Black Mountains. Javier, the Spanish wind maker, was very knowledgeable about the wind process. He explained  that the owner wasn’t sure his building on the hill top would be a winery or an elaborate resort.

Whild we were tasting the wine, Javier explained that the “terroir”  here was unsuitable for making a quality cabernet  but the winery owner was “assigned”  to produce it by the government.

(Maybe that encouraged thoughts about a resort!)

The next day we went to see one of the most fascinating sites in Xi’an. 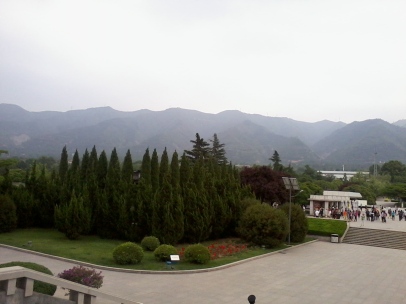 Our driver dropped us off but we still had to walk a mile to get to the Terracotta Warriors.

This shot is an overview of the valley and the mountains surrounding their resurrection.

The Terracotta Warriors were discovered in I974 by peasants digging a well. These ranks of life-sized pottery figures were made to guard the tomb of Qin Shi Huangdi  who unified China over  two thousand years ago. This pit contains the infantry with every face unique.

This pit, with ongoing excavation, is filled with cavalry, soldiers and their horses.  The pottery horses have been reassembled from their broken body fragments, the same as the warriors around them. (I had to label my picture “The Headless Horsemen”.)

The poor light resulted in a blurry view but this shows the actual excavation and difficulty in resurrecting the body parts and assembling them.

In 221 BC, Qin Shi pronounced himself  the First Emperor of China. At age 13 he began the “Warriors” as guardians to protect him in the after-life from his numerous enemies. (7000 soldiers so far but the excavation is unfinished.)

The Emperor died 1 year before the complex was finished.  A fantasy army to protect him after death….much like the Egyptian Pharos. A wonderful storied history.

Then we visited the enormous City Wall.

Again, more steps and walking…but worth it! Following this we saw the bustling Muslim Quarter and the Grand Mosque…and needed assistance  to get to the car and our hotel.

The next morning we flew to Taiyuan, meeting our new guide Miller and driver, Mr. Yao, who  drove us to the Hotel Taiyuan Grace Vineyard.

Our suite is top floor, left, with an over view of vineyards. This lovely hotel is used for visiting vintners  and wine educators: we fit the second category. Immediately out to the vineyards for the field tour. During the cold winter months they “buried”  the vines, so we were seeing much new growth. Most of the wine was red Bordeaux varieties  although they are experimenting  with Italian and Spanish grapes. 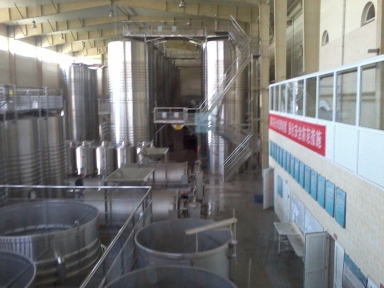 This is their fermentation and production area. Now to the best part: the tasting room!

Our “following” of 8 winery employees, including the business manager and the wine maker,  smiling (as was I) and 3 bottles of wine to taste.

Even our 2 translators (one to English and the second to Chinese) perked up.

The Chinese eat many vegetables but not much meat.  That evening our hotel served the best spare ribs I’ve ever eaten….and I mentioned this to our waitress. The next morning we had them again for breakfast…delicious. 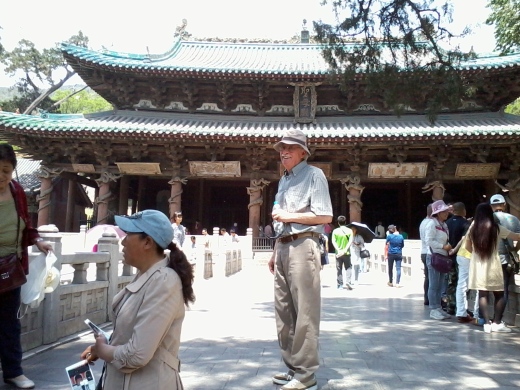 Today, on our way to Piangyao, we stopped at the Jin Ci Temple (above). Built of wood  during the Song  Dynasty (960-1279)  for The Sacred Mother  (Shengmu Dian) with a 2 thousand year old tree shielding it. Mike had just requested that we stop for a drink and Miller said “Certainly, we can stop at a tea house.”  Mike said “No wine?” Miller answered “No wine or alcohol here.”

What looks like a smile is really a grimace.

So we drove on to Piangyao Ancient Town  considered the best historic walled city in China. 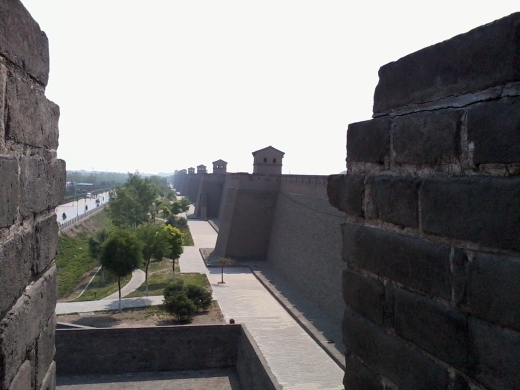 The banking center in China began here.  That certainly helps explain the mammoth walls that surround the city and the beautiful buildings within. And one of these was our 600 year old Jing Hotel, a smaller courtyard hotel, in the city center.

And this was the city center and the mobs of people that we had to walk through to get to our wonderful hotel in the center of the city. But you’ll notice no cars, only taxis if necessary. 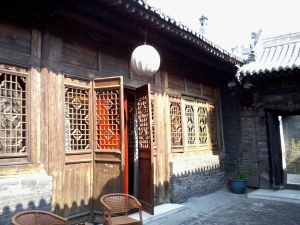 Our suite is on the left, and although  old, everything was extremely modern.

It was a wonderful small town for China, only 60 thousand people. No cars (except taxis) on the main streets…what a delight, you could walk!

Tomorrow we leave to go home…..and our gentlemen friends will make sure of it.

Caroline Botwin and her husband Mike are retired educators who have always had a yen for travelling: he with a PH.D and teaching Architectural Engineering plus California wine education, and she having taught high school English, speech and drama. Both wanted to learn first hand about other cultures. While Mike predominately studied buildings and structures and met with winemakers, Caroline hunted for ancient sites and peoples. And kept journals of all their travels.
View all posts by carolinebotwin →
This entry was posted in China. Bookmark the permalink.

2 Responses to China: Beijing to Yinchuan, to Xi’an and Piangyao