Eulogy for a dog

A very young boy and 2 pups: a lifetime for the dogs  and a maturation for the boy.

Kevin, our neighbor’s grandson, came to play with the dogs after school when he was 10. He would throw the ball in the yard and anything that was handy: socks, toys, food, etc. Gamba (bigger) and Coquille (smaller) loved him.

And at 12, this relatively small boy had enough strength (and moxie) to walk them twice a week.

After walking, he would always sit on the floor  and pet them…while they jostled for the best position. Although he is partially cut out of the frame, he got them quiet (almost) for the picture.

And Kevin continued walking them for the next 12 years. The dogs recognized the car and would go into a  frenzy when he drove up.

This picture is shortly before Coquille (on right) died on the couch in our family room.  I was sitting with her when Gamba came in, barked at her, and ran away. Shortly she returned, barked again, and went to lie in the living room for the next  2 days.

I helped her onto the couch for this picture….but you can read her body language. We went looking for a companion  and found a 6 year old “Daisy” at the Shelter and brought her home.

And between this vibrant Jack Russell Terrier and Kevin, they brought  Gamba back to life.

Gamba, at this time 14, had heavy losses in sight and hearing. On our daily AM walks both Mike and I noticed  that she followed Daisy, her black & white signpost. In the park Daisy once caught  a gopher but didn’t have the strength to kill it.  Gamba (combo Pit-bull, Chow and German Shepherd) took it from her, bit it in half and presented it to Mike and me.

Daisy, a Terrier, grabbed the other half and ate it.  Then they were a team! 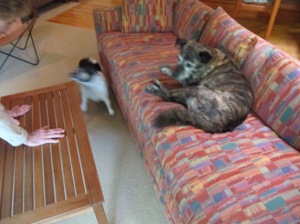 This was a fuzzy picture because it was difficult to keep this new dog still….to be expected by being dumped into new situation.

Meanwhile Kevin finished high school and attended Cuesta College still continuing “old dog” walking. He excelled in many areas and became our computer  “Guru” for the past 3 years. 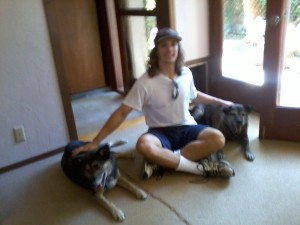 We have produced 44 blogs and 3 loved and well adjusted dogs. This is a picture of Kevin, now 23, with the old and new dogs, just before Gamba died last week at 16 years.

God love her,  she did our AM walk with us….and the next morning  she could  not stand.

She nuzzled both of us when we carried her into our vet’s office and held her when she died. 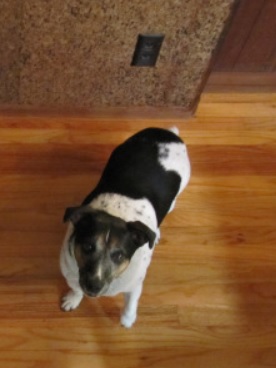 Mike and I and Kevin morn her terribly—–but remember  her 16 years with joy.

Now Daisy is picking up the slack.

As Kevin, the dog walker, I’d like to share my own experience over the near 15 years I spent with Gamba and other dogs (Lobster, Coquille, and Daisy). From my perspective having the routine and responsibility every week of walking and caring for the dogs, as well as interacting with two very intelligent, kind, and generous adults has been such a blessing for me. I slowly developed a second family over time. The walks in beautiful SLO with my two loyal and loving companions were a meditative time and activity for a boy, and eventually a young man, to reflect upon his life. Gamba was constantly on the lookout for my safety, tensing up and seeming to become twice her size when she expanded her powerful ribcage and made the hair on her back raise up. She was a natural guard and hunting dog. Cats and gophers were her prey of choice. While she caught, and many times ate, many gophers she never (to my knowledge) caught any cats. Though there were some near incidents…

Aside from unyielding love and loyalty Gamba also imparted a great lesson of wisdom on me. Through watching the various stages of her life I witnessed firsthand the powerful transformation of time and the process of ageing. Caroline originally hired me to help socialize Gamba with humans, children in particular. She had a natural aggression that any good guard dog would have. And over time as she grew through childhood, teenage years, and into adulthood I saw this aggression and her overall temperament change and refine. By the time she was elderly she no longer even cared to challenge an approaching dog or a taunting cat. The once sprightly and fighting spirited dog had become, just like many elderly humans: carefree, calm, and seemingly contemplative (for a dog at least). 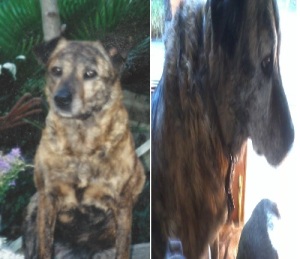 This observation of an animals life and its transformation of character became a profound realization of the similarity between all creatures; no living being escapes the process of life. It caused me to take a moment to reflect upon my own transformation through my boyhood, teens, and early adulthood that I experienced with Gamba. She had in some odd way become an adopted sibling of mine. We walked a great deal of life’s journey together, both literally and figuratively. And though she is physically gone her memory will walk with me till my end.

Caroline Botwin and her husband Mike are retired educators who have always had a yen for travelling: he with a PH.D and teaching Architectural Engineering plus California wine education, and she having taught high school English, speech and drama. Both wanted to learn first hand about other cultures. While Mike predominately studied buildings and structures and met with winemakers, Caroline hunted for ancient sites and peoples. And kept journals of all their travels.
View all posts by carolinebotwin →
This entry was posted in America, California. Bookmark the permalink.

1 Response to Eulogy for a dog