China, from Beijing to Yinchuan…….

Hard to tell if the statues are welcoming, threating…or both! After our 2 hour flight to Yinchaun  we met our new tour guide Jackie and his driver. While waiting for our luggage, there was a tap-tap on my shoulder. Looking down into a smiling Chinese face,  I said “ hello” (badly in Chinese), she laughed and said “How old are you?”

I used my fingers to demonstrate. She and her 2 companions laughed and then they all bowed to me. The Chinese do respect their elders…and I loved it. Jackie then told me that this question, plus “How much money do you make?”  was asked of all Westerners.

We stopped at our assigned Chinese Holiday Inn Hotel, quite lovely and very different from our American chain. We then were immediately off for the first winery visit.

New building but looked like a beautiful aged French chateau. 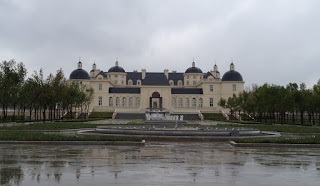 The owners, the Changyu Company began operating a winery near Beijing in 1892, but this structure was 3 years old. The winery guide did not know what to do with us so she just led us through the HOT Vineyards until our guide Jackie convinced her that Mike wanted to confer with the Winemaker.  Keith then joined us, and speaking English, pointed out various vineyards and the wines produced from them.

Entering the cooler chateau and descending to the much cooler basement, we found a museum of wine-making artifacts  covering one hundred years! Keith then led us to the tasting room (much anticipated) past glass fronted storage areas with hundreds of wine cases stored for the owners. (Many buyers did not have temperature controlled storage.) The tasting was marvelous!

Next to the Chateau Bacchus Winery.

What an appropriate name for a winery! So far the Chinese wines we had tasted were up to international standards but their buildings certainly exceeded that. Mike was delighted with the information from the Bacchus wine maker especially that all the wines produced here came from their own vineyards, unlike many of the wineries in the U.S.

Back to our Holiday Inn and a quiet dinner. We asked our waiter for menus and he replied “They are right in front of you.” And there they were. “I pads”! How modern.  10 pages of salads in brilliant color ….but my first two choices were “not available”, 5 pages of chicken  and so on. It took us awhile because Mike’s first 2 choices of wine were also not available so we had beer……..but our hotel room was lovely!

The next morning we were off to Sumeru Grottoes.

This is a continuation of The Great Wall  from Beijing to Ningxia and beyond. Although a definite tourist attraction, there was no comparison or renovation as with the Beijing Great wall.

Good exercise climbing up and down and certainly fewer people than on the Beijing Wall.

We had choices of walking to the Ningxia Museum, riding in an open cart, or on a camel.

One camel , eying us, chewing and accumulating moisture….and we were in the cart! 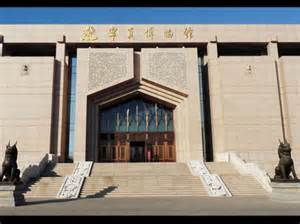 Ningzia Provincial Museum was outstanding: artifacts from ancient times, the Silk Road era and a mind boggling 3D film with spectacular holographs on the indigenous Hui people. All spectators stood on different levels of rock shelving. The theater darkened. Low music began, wind sounds, stars blinking above and thunder and lightening boomed out.

Here we were bombarded with storms, land reshaping,  wild winds,  as the topography changed: an ancient land evolving over centuries.

The film paused  and we see actors/natives descending from rock caves down to the streams for water and fishing. 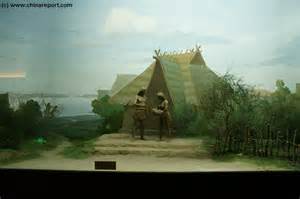 As time and civilization advance, we see 2 natives in front of an elaborate  bamboo house, perhaps sharing food.

The beginning of the hunters and gatherers and the sharing of food.There were also wars between the natives with the losers being absorbed into the winners’ tribe.

We wanted to see the presentation again but the next showing was in Chinese. This unbelievable presentation covered 30,000 years of change in China with the scenes being superimposed over each other  and bonded with a voice over and music.

We saw many sights like this. The original farms and vineyards were consumed for apartment/condo  expansion.  Most of the towers were empty. Many farmers were originally allocated  15 acres of land for crop growth, and sold if they moved to the city.

Buying a condo on a 10 year lease, (the building owned by the government), and getting a  job ……it could work out. But, if you moved outside the province of your farm, you lost medical and educational benefits.  Not an easy decision.

The next day Jackie took us to The World Rock Museum in the mountains.

This building contained rock art sculpture and carvings from the last 30,000 years. The carvings in the area were discovered by the military around 1960—but not pursued until the  “80’s” when archaeologists started digging.

Suitably named “Ancient  Rock Carving” dated  20,000+ years ago. If they’re  specific animals from that time…I’m mighty glad they are extinct!

While resting on the steps outside waiting for the others, I heard some noises from the shrubbery. Finally a small white and black nose poked through: a baby goat!

We stared at each other and he had the confidence to move to the edge of the steps. The bushes rattled behind him and suddenly there was a small herd of Momma and Baby goats nibbling on the greenery. What a way to end our visit to the Ancient Rock Carvings ….and to Yinchuan!

Caroline Botwin and her husband Mike are retired educators who have always had a yen for travelling: he with a PH.D and teaching Architectural Engineering plus California wine education, and she having taught high school English, speech and drama. Both wanted to learn first hand about other cultures. While Mike predominately studied buildings and structures and met with winemakers, Caroline hunted for ancient sites and peoples. And kept journals of all their travels. Kevin Klimczak, extraordinaire, is the website designer and editor of the blogs.
View all posts by carolinebotwin →
This entry was posted in China. Bookmark the permalink.