The Templar Knights of La Couvertoirade

We left Montpellier, France on the A-75 highway to Paris. It was heavily packed with Sunday traffic and impacted with roadwork repairs. We exited for the first stop in tracking the Footsteps of the Knights Templar at the 11th century site of Covertairade. This beautiful walled city is set in the middle of pastoral farmlands with distant rolling hills. The entrance to the village is through huge doors that were barred from the inside during attacks. Then crossing a tiny plaza in front of a museum, we continued walking past both ancient and some refurbished houses and shops.

It’s easy to spot the older buildings and the ones being refurbished, particularly windows with glass and some sharper edges on the roof lines.

The streets were narrow and graveled. We came to a lovely 12th century church adjacent to the castle/armory built on top of a ridge.

This is the front of the castle/fortress with certainly sharper lines and the Templar Cross in front guarding the village. This height gave oversight of the stream and farmlands below…a very important factor when you live on a road that leads to the ports of the Mediterranean Sea.

This is the back of the Fortress and in those times, easily defensible!

Although these local Templars were originally concerned with teaching farming techniques and improving the livestock of the farmers, but roving bands of attackers forced them to also become protectors. Guardians and protectors of this village is what they did. They built basements for storing animals and food. And giant front gates.

The stones in the 2nd row are from the 12th century but a few of the roof tops and towers are not. The small openings in the walls allowed the animals to feed outside but were easily protected.

Some houses have already been rehabbed for cafes and artisan shops, and when we were there, one restaurant.

The wares of a weaver were advertised on the flag above his shop and below were vibrant blankets, throws and scarves draped over tables and chairs. He said the government was selling these rustic structures cheaply and in particular wanted artisans, -restaurateurs, writers and the like to buy. There were two stipulations: the owner would remodel (plumbing, electricity et al) and would live there. The benefit being one could freely sell his or her wares. Since tourism was just beginning in this area, the weaver hoped it would become quite profitable.

The village agent recommended the hotel Midi-Papillon in Saint Jean-du-Drul and called ahead for us.

The lovely old Hotel Midi-Papillon was built next to a deep gorge. 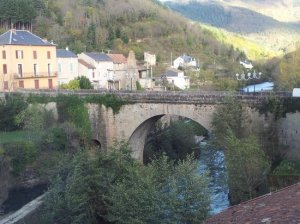 High wooded hills surrounded the village with a rough 13th century bridge crossing the river and a 15th century church at the end.

The Hotel fronted a small patio beside the gorge where we could partake of drinks, cigarettes, and coffee—but not much conversation due to the roaring water.

After an excellent breakfast finished with coffee overlooking the misty gorge, we continued our Circuit du Larzac.

And that will be Sainte Eulalie de Cernon.

1 Response to The Templar Knights of La Couvertoirade