Freefall at the Tivoli in Copenhagen, Denmark 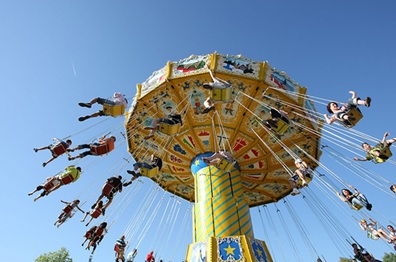 We took a cab from the airport to our Copenhagen Plaza Hotel and checked in. Stepping out on our 4th floor balcony I was delighted to see the main train station on our right and directly across the street was the Tivioli, one of the most beautiful amusement parks in Europe. Timing was everything! Suddenly, what looked to be a giant umbrella arose from behind the park wall and opening gracefully began to climb. It slowly spiraled around swirling out the tethered chairs attached beneath. The sounds of scared laughter rose with it until the flying seats were parallel to the park ground 5 floors below. I was reentering our room when the shouting lessened and the  umbrella began to close, descending to earth. 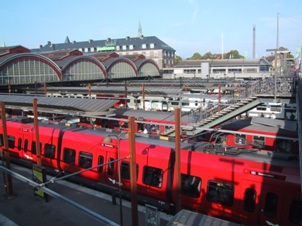 A train came noisily into the station and distracted me from this wild ride that both fascinated and terrified me.

The weather was bits and pieces of chill with a few drops of rain but we needed exercise after a very long flight from San Francisco. We headed out on the pedestrian zone to do a walkabout. Because the cobbled-stone streets can be slippery when wet, we crowded in with the others sharing the narrow sidewalks. We spotted a “Plank Steak House” serving spare ribs and caught a couple of seats next to the fireplace. Excellent meal. Back to the hotel and the balcony to watch the fascinating Freefall again.  The umbrella was rising and the vocal whoopla was beginning……but this time there was one voice that screamed in panic. As it crescendoed into piercing shrieks, the Freefall’s ascent  slowed and then stopped. Then it began to lower. When it reached the ground, it was quiet.

A few minutes later it rose again trailed by the normal yells of delight and fear.

Now I felt really comfortable with this wild and scary ride.

The next day we walked through the park entrance….and the area was so large that without the map we would have been lost. Rides, restaurants, gardens, shops, ponds…it was wonderful, and vital. We spent hours. This is a city and country that we plan to revisit.

Caroline Botwin and her husband Mike are retired educators who have always had a yen for travelling: he with a PH.D and teaching Architectural Engineering plus California wine education, and she having taught high school English, speech and drama. Both wanted to learn first hand about other cultures. While Mike predominately studied buildings and structures and met with winemakers, Caroline hunted for ancient sites and peoples. And kept journals of all their travels.
View all posts by carolinebotwin →
This entry was posted in Denmark. Bookmark the permalink.

4 Responses to Tivoli in Copenhagen, Denmark