The Serendipity (choices) of Senior Malfunctions

Posted on December 23, 2018 by carolinebotwin

After leaving Venice and Slovenia, ultimately heading for Split, Croatia, we were sidelined by Rovinj, Croatia. And this picture is what lured us. On the left, by the sea, there was a narrow road that dead- ended in multiple parking lots wedged between the buildings. So we did too. 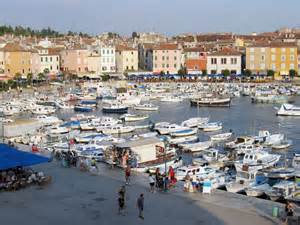 Out with the umbrellas and start walking. We circled the buildings and arrived at “Port Side” just as the sun and people came out! Confused by our location and the whereabouts of our car, we stopped for a map.

And the uncertainty vanished. This is an Overall view of Rovinj and our car was hiding on the left side, near the water, while we had zig-zagged between the houses to the Portside path. The first hotel I looked at was for “Sailors” only. (I wonder what they would have said if Mike had gone in?)

The final one was on the other end of the Port Side and perfect. Small, maybe 10 rooms, and the owner gave us a 2nd floor room with this view.

The Old Town and Church are straight ahead…a bit on the right. The hotel’s restaurant was just below us. The owner gave us directions for car retrieval (using back streets only) and a parking spot next to the hotel….and we extended our stay to two nights. But first, I love Old Towns and wanted to see this one.

This one was very different. It was and is a fishing port….so the major entrance is the door opening to the sea while the alley ways we saw were secondary entrances…narrow, dark and functional. But well maintained. This picture with the pumpkin in it allows us to see the shrouded passage way behind it. Then it began to drizzle again and we found the perfect place to eat.

Choosing a small table adjacent to the restaurant, we applauded our waiter raising an umbrella.  We had a narrow view of the Adriatic Sea and the fishing boats returning. The thrumming of their motors and their twinkling lights were a wonderful show. (Too dark for a photo.)

The next morning we noticed a large green area on the far left of our balcony.

Our hotel owner said it was open to all.  And it was exquisite….some very old stone walls, an occasional “rusting” statue and views over the sea. Of course we did a wine tasting and tour that afternoon. Mike rated the wines very highly….as the driver, I only had 2 sips. Dinner in our own restaurant that eve.  The seafood and the local music were exceptional.  This city was a wonderful choice….but we didn’t realize it until we arrived.

Caroline Botwin and her husband Mike are retired educators who have always had a yen for travelling: he with a PH.D and teaching Architectural Engineering plus California wine education, and she having taught high school English, speech and drama. Both wanted to learn first hand about other cultures. While Mike predominately studied buildings and structures and met with winemakers, Caroline hunted for ancient sites and peoples. And kept journals of all their travels.
View all posts by carolinebotwin →
This entry was posted in Croatia. Bookmark the permalink.