Posted on September 8, 2018 by carolinebotwin

This was our planned Murray clan meeting place. Mike and I flew in from LA while brother Frank and his wife Sally drove in from Gross Point Woods. And timely that we met in the garage—Frank had to move his SUV over so we could fit our normal rental car in the space. Settling into our rooms we agreed on a dinner time and “The Discussion” that would come with it. 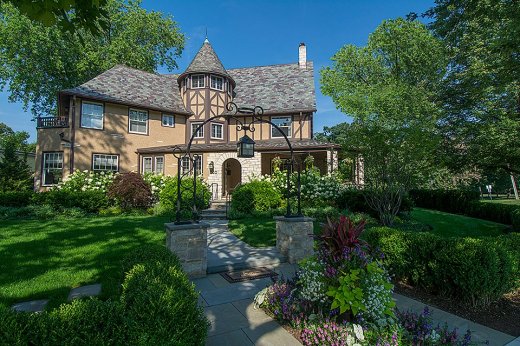 And this is where we stayed.

This was the view as we came walking out of the house….eat your heart out….

Tom, our senior Murray was in a Senior Center Care place and we had arranged to meet the next day for lunch at Affresco Pizzeria and Lounge. Having contacted Tom’s daughter Suzanne, earlier, Mike and I asked her to arrange for a table: Inside if foul weather and outside if fair conditions. “And all was go”.

Being chilly out about 8 of us managed to fit at table a: the food and drinks were excellent. After a glass of wine (or 2) talking and laughter abounded. My brother Tom was sitting next to me and he slid over a large envelope, “Read later, I tried to compile information on the Feuerbachers so you can write the history”.

—This next section was taken from a news article written about the history of the Southern Commercial Bank and its founders—One of whom was Frank Feuerbacher….our grandfather.

In the years following the Civil War, several Carondelet-area banks were organized and failed. In 1891, however, Southern Commercial Bank was founded. Rooted in the values of its immigrant, working class founders, it thrived. For a hundred years, Southern Commercial has played a vital role in the stability of the South Side of St. Louis.

More than any other individual, German-American John Krauss was the inspiration and organizer of this Carondelet institution.

“Krauss then invested his profits and energies in local interests including the Carondelet Zinc Works. Carondelet Flour Mill, and Klausmann Brewery. When Klausmann Brewery faltered, Krauss bought it to protect his interests. Under his management the brewery grew multifold. After twelve years, he sold it to an English brewing syndicate for $650,000.

In 1891 Krauss became the first president of the Southern Commercial Bank. When John Krauss died in 1897, there was an interim president until Frank W. Feuerbacher took office in 1898. Frank Feuerbacher, John Krauss’ son-in-law, was stepson and adopted son of the German-American brewer, Max Feuerbacher. Four years later he married Caroline Krauss.

In later picture above see Frank and Caroline. (The above photo was taken with state of the art photography technology at the time.)

Late in Frank Feuerbacher’s tenure, in 1922, Southern Commercial Bank was one of the first state banks to join the Federal Reserve system. Arthur Henry Feuerbacher succeeded his brother as president of the bank in 1928.

In 1930, as banks across the nation faltered, conservative Southern Commercial Bank was able to celebrate its steady growth by Opening its current stone and brick building on South Broadway.

*Courtesy of NiNi Harris, “A HISTORY OF CARONDELET”

(You may receive a copy of “A HISTORY OF CARONDELET” at any Southern Commercial Bank location by making a $5.00 donation to The Carondelet Historical Society!)

Caroline Botwin and her husband Mike are retired educators who have always had a yen for travelling: he with a PH.D and teaching Architectural Engineering plus California wine education, and she having taught high school English, speech and drama. Both wanted to learn first hand about other cultures. While Mike predominately studied buildings and structures and met with winemakers, Caroline hunted for ancient sites and peoples. And kept journals of all their travels.
View all posts by carolinebotwin →
This entry was posted in America. Bookmark the permalink.