Posted on February 8, 2018 by carolinebotwin

There was rain, cold, and even bits of snow- but that was October in Moscow. Then onto St. Petersburg, and the weather was slightly milder but still cold. 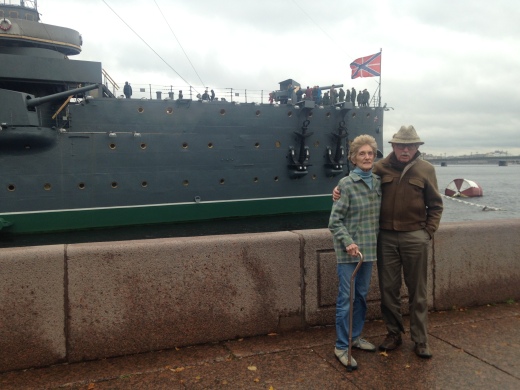 We’re standing before the ship that with one shot ended the revolution. Smiling but freezing, when the cannon turned our way we were out of there!

The best part was yet to come.

Our final destination was, Anapa, on the Dead Sea and encountered 65 degrees and sunshine.

Mike had contacted Charles Borden, an American who lived in Russia and who is a food and wine writer. After reading his 2014 book, “Russia Wine Country- Sleeping Beauty Awakens.” There was no going back! 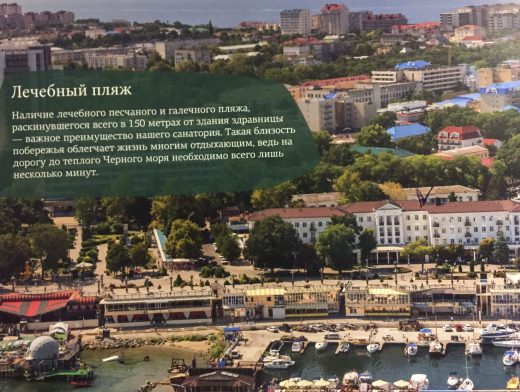 And this is where we stayed for four days, in the red roofed white building on the right. In front you will see the Black Sea which is a resort area- and beautiful.

This is the North Eastern shore of the Black Sea, some 60 miles from the crossing of the Crimean Peninsula and about 200 miles North of Sochi. It was founded in the 2nd Century BC as a Greek trading Port. The Black Sea provides a great moderating influence. Rainfall is sufficient so that the fruit and vegetable growing regions near the shore survive well. The terrain is rather flat with deep rich soils. And nearby are the Caucasus Mountains.

In 1985, president Gorbachev, initiated an anti-alcohol program targeting not only vodka, but wine. This resulted in a two thirds reduction in the vineyard acreage. Until the collapse of the USSR the states farm system was privatize. Today the Anapa region has in the order of forty, “serious” wineries. 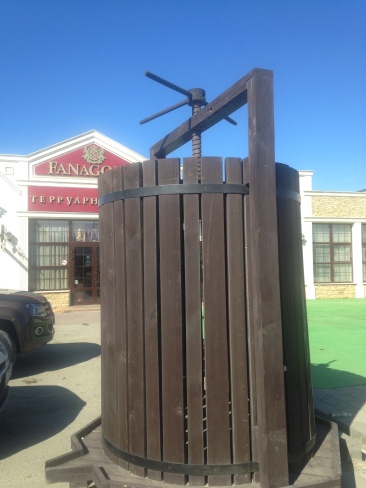 And they treasure their older methods of grape processing.

The Fanagoria Estate winery lies about 20 miles North of Anapa and very close to Crimea. The original 1950s state farm buildings belie the most up-to-date stainless-tanks, and other equipment within. They produce an amazing array of beverages from a supermarket bag in the box series, to excellent high-end varietals. Plus a display of very impressive wines from regional varieties.

The hospitality here, lead by the Russian speaking Vladmir Pukish, was outstanding. 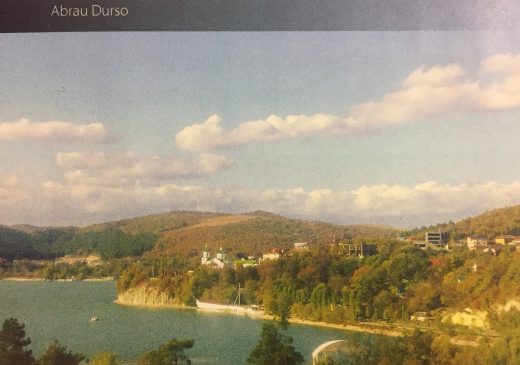 Russias primer sparkling wine house, Abro Dorso is situated in an idyllic setting surrounded by mountain forest and overlooking a beautiful lake. The handsome main building, constructed from local stone that dates to the wineries founding in 1860 by Russian Royalty.

Since its privatization in the 1990’s the faculty has seen a major production modernization program. Their top end can hold its own with the worlds best.

Next week we will take you walking through the vineyard and barrel making… and a bit more. 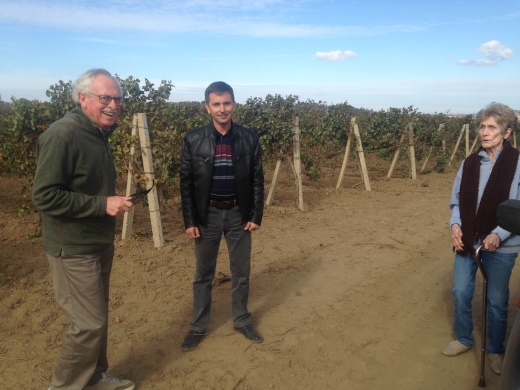 Starting with this picture.

Caroline Botwin and her husband Mike are retired educators who have always had a yen for travelling: he with a PH.D and teaching Architectural Engineering plus California wine education, and she having taught high school English, speech and drama. Both wanted to learn first hand about other cultures. While Mike predominately studied buildings and structures and met with winemakers, Caroline hunted for ancient sites and peoples. And kept journals of all their travels.
View all posts by carolinebotwin →
This entry was posted in Russia. Bookmark the permalink.