Posted on November 15, 2017 by carolinebotwin 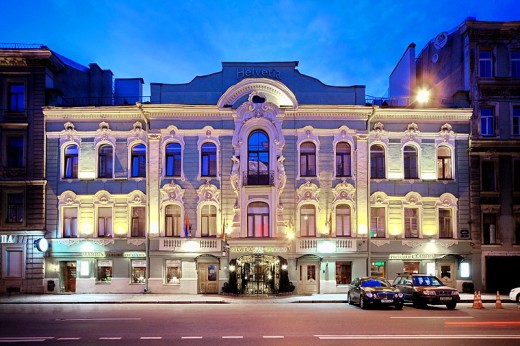 Saturday October 7th, we took two trains to Saint Petersburg and arrived at 7 PM: A mob of train people- including, “Taxi hunters” hustling at exorbitant prices. If you were dragging luggage you were a victim. Mike kept saying, “Too much.” Until he got a reasonable price.

Our destination was the Helvetia Hotel, and what a very good choice 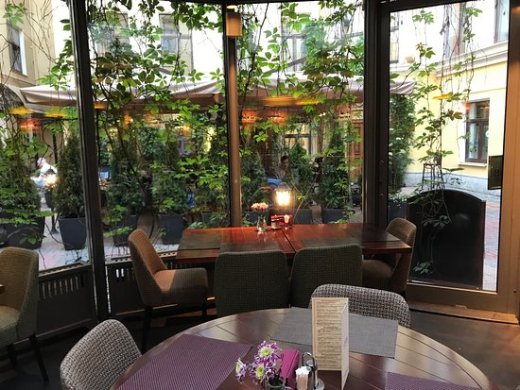 It is comprised of an early 9th century converted mansion with a gated and guarded entrance. It opened into a lovely courtyard covered by an awning for the occasional rain. An oasis of chairs and tables outside- with lovely greenery abounding. The Helvetia Hotel is located in the city center and is in the immediate vicinity of the main artery of foot traffic. Only 5 minutes away from the Moscow train station.

The next morning our guide, Natalia, took us to see the infamous Aurora ship that is revered as a symbol of the 1917 Revolution in Russia. The cruiser fired one shot to prod the revolutionists into storming the Winter Palace, seat of the provisional government that the Bolsheviks planned to overthrow.

We were cold so we will put this off till next week!

Caroline Botwin and her husband Mike are retired educators who have always had a yen for travelling: he with a PH.D and teaching Architectural Engineering plus California wine education, and she having taught high school English, speech and drama. Both wanted to learn first hand about other cultures. While Mike predominately studied buildings and structures and met with winemakers, Caroline hunted for ancient sites and peoples. And kept journals of all their travels.
View all posts by carolinebotwin →
This entry was posted in Russia. Bookmark the permalink.