Posted on January 25, 2015 by carolinebotwin

The agreement was that I would stay in this wonderful city while Mike would expand his wine education activities in Morocco and join me here later. I had reserved a marvelous hotel Condes de Barcelona.

Of course top floor, terrace and view. Our hotel is on the left and one can see part of the bar/café at the very top. We arrived around 10:30 AM from the airport and had plenty of time to re-explore this bustling city before Mike flew out tomorrow. When I explained our “double, singles, double”  room to our concierge, she said “No problem on adjusting the charges.”  Lovely start!

Three blocks down the street we noticed the Gaudi House of Casa Batllo with a sign out front “Open at 11” and no one in Line!  The noveau furniture and decorations were soft, curvy and very appealing. Gaudi had re-constructed this house for a client in 1904-1906. 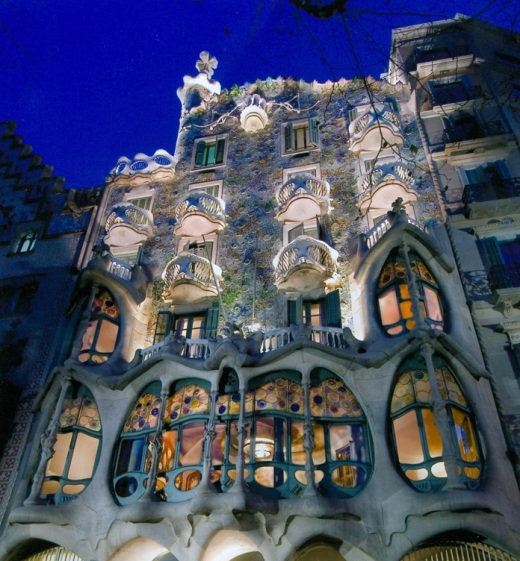 This vibrant, green pedestrian street ran all the way to the port. Popping into one of the larger markets, we found a small meat counter where you make your selection, they cook it and bring it to the adjoining restaurant.  Delicious! The best part was watching the shoppers.

Since Mike was leaving for Morocco tomorrow, we chose our roof top café that eve. 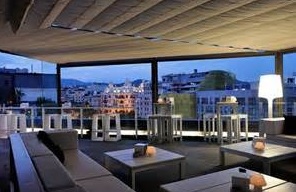 With a glass of Cava and a salad , we were able to leisurely overlook our corner of the city. Looking at the top left of the picture, you can see the bright white lights of of Gaudi’s 1920 Casa Mila. And that’s where I would start my independent sojourn.

After breakfast and Mike’s departure, I went to the concierge and asked  for “opening” times

of Casa Mila. She said “I can do better than that and reserve a place for you.

There’s a tour at 11?”  “Wonderful” I said and left a nice tip. I didn’t realize until I arrived at the

site how valuable a concierge was: 6 people in the reserved line and over 50 in the public one.

Now, that Gaudi has finally been acknowledged as a genius, our tour got to see the whole building. We saw the basement (laundry) all five floors and roof. Windows on front and back for cross ventilation.

The first level of the courtyard had been allocated for drying clothes. Keep in mind this was built in 1920…no washers or dryers yet.

We (carefully)  walked the rooftop, amazed that these fabulous statues were simply elaborate air vents and chimney-pots! I was so enamored with “rooftops”  that I went back to our hotel’s again that night.

The next morning, I was off to revisit Gaudi’s La Sagrada Familia.

I walked there and sat at a café facing the church. Twenty years ago, when we first viewed this building, there were only 8 spires, now much has been added. Then, when you entered the building, your eye followed the spires up to the open sky…magnificent.  Now, they had added a roof. (There were no definitive plans after Gaudi died because they were all in his head). Still magnificent but I treasure the original poster we had bought home.

That evening another dinner at the rooftop café.

The weather was excellent and so was the Cava with an omelet. The waiter approached and whispered that a gentleman wanted to buy me a glass of wine. (I looked and happily he was about my age.)

I asked the waiter to thank him but I was tired.  Around 10:30 I heard laughing and shrill voices in the hallway….opened the door to see 3 young women in swimsuits  chasing a man down the corridor. Asked if there was a problem (the man ran around the corner) the oldest snapped “no problem”. I called the front desk and told her they were headed back to the pool.

On my way out the next morning I asked the concierge for a map and directions for Las Ramblas.  She thanked me for calling about the disturbance last night  and said they had occasional problems with college girls sneaking into the hotel.

During my very long walk down the Ramblas to the Port, I saw a wonderful “Mime”.

She was spectacular! Literally frozen, unblinking  but would gently wave one hand when money was put in the pot at her feet. And of course I did.

The pedestrian street became quite crowded and noisy.  There were many small vendors with carts in the street and many shops along the way. Exhilarating! 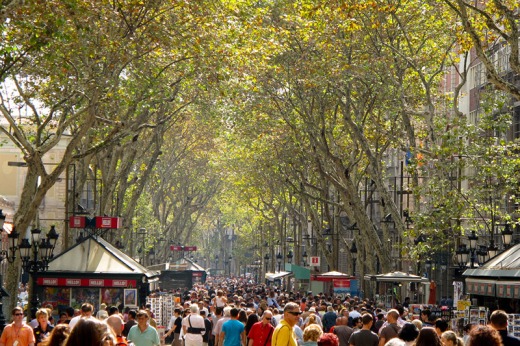 Eventually I took a side street that let into a small hotel/restaurant square with a side view of the Ramblas parade and had coffee.  Later I couldn’t  resist a “princess” dress  for our granddaughter…. And she liked it.

Finding the Portside was a reward for the long walk. 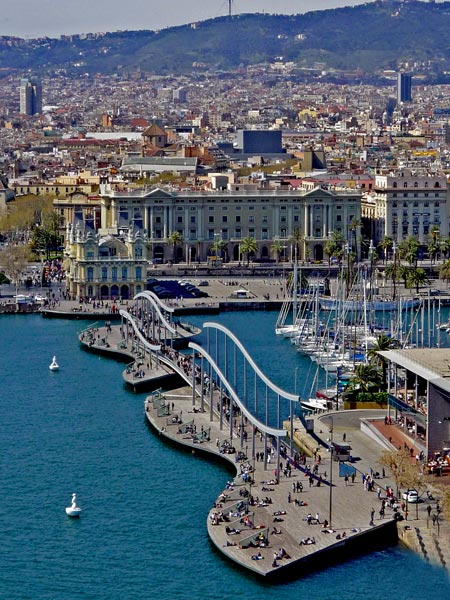 It was wonderful! The squeals  of the dipping sea gulls being fed both by children and tourists, the smell of the ocean  and the warm sun on my back.

Tired after walking eight miles, I got on a bus for the return. At the next stop a large man, and his entourage of three women, boarded. He decided he wanted my single seat and stood glowering at me. I glanced up, smiled, and said “bonjour”….  He growled, moved ahead to another seat where the woman immediately rose and moved away. The story, I don’t know, but my concierge loved it.

This was my last evening before Mike returned at 11:00 PM.  My routine established, I went to the rooftop café.

While sipping a Cava, I realized that I really missed my husband…and even his snoring.

The next morning (Mike wanted to sleep in) , I took the elevator down to breakfast.  The doors opened to my 3 young friends blocking my exit.  They wanted the 5th floor button pushed for them.  “How fortunate” I exclaimed.  “The receptionist just called my room and asked if I had seen you”.  They looked blank.  “Apparently some one’s mother just called the front desk    asking for one of you to call home.”

Startled….they turned and ran out the hotel exit door.

Not true about the phone calls but I smiled my way through breakfast. (It never pays to mess with a retired high school teacher.)

When we checked out at midday, the concierge  said we had one night “gratis”  because we supported the house protocol  with” uninvited guests”.

Once again, we experienced the serendipity of our Senior Malfunctions…especially in a big city!

Caroline Botwin and her husband Mike are retired educators who have always had a yen for travelling: he with a PH.D and teaching Architectural Engineering plus California wine education, and she having taught high school English, speech and drama. Both wanted to learn first hand about other cultures. While Mike predominately studied buildings and structures and met with winemakers, Caroline hunted for ancient sites and peoples. And kept journals of all their travels.
View all posts by carolinebotwin →
This entry was posted in Spain. Bookmark the permalink.