Posted on September 2, 2014 by carolinebotwin

The next morning we drove to this ancient Monastery.  Our guide, Maka, said it would be a rough road but she was wrong:  it was hell!   We bounced on the narrow dirt road with pot- holed craters through the hot and  barren mountains for two hours. But forgot the travail when we reached this fantastic site. The discovery of Bronze Age tombs and pottery show that people lived in this area for over four millennia. The original forests were destroyed by iron smelting leading to desertification. The picture above shows the oldest caves, on the right, remaining  from the 6th century. We climbed a mile from the parking lot, on a windy and narrow path, to reach the topmost monk cells. (Not recommended for the weak of ankle)

And a spectacular view!

The newer additions, down to the left, were added in the 9th, 12th and 17th centuries. The towers added for communication with other monasteries. There were continuing invasions  from the Persians, Mongols,  Turks, Seljuk, Ottomans and Russians to name a few.

This picture shows  the later monastic growth and the steep valley with the river acquired, according to legend, by the prayers of Saint David.  The water brought deer and other animals enhancing the monks’ diet considerably.

When we got back to our hotel, I wanted to sit on the balcony, feet up, wine in hand and then shower before dinner on the roof top. The first 3 were doable. But the President of Georgia had commandeered the restaurant (and most of the Hotel) for a political function. Most of the building was under scrutiny from the 20 plus  guards. Why they didn’t throw us out?  Maybe Georgia honors pre-reservations…..unlike other countries I won’t name. And the guards were circumspect: nodding and smiling as we walked to a near by restaurant through the parking lot and street….all empty of cars and people.

The restaurant had a small band playing “What a Wonderful World” and it was! We ordered, and shared, a rabbit and tomato strew which was superb. The next morning Maka joined us and off to the wineries.  First stop at Chateau Mare.

Remarkable Castle-like setting and, from the crowd, very popular.   They basically offered  a “destination” with rooms, meals and even a swimming pool. 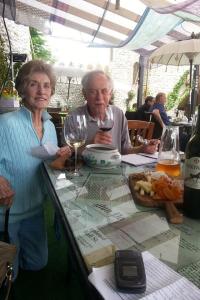 It was delightful that they had made no effort to disguise  that it was a pretense of Italian Renaissance. On the right are  hotel rooms then the pool backed by a mini-castle structure. Many languages bounced around the veranda.

George, the 6th generation and associate wine maker, led the tasting and took the picture.  I am smiling…..but being the driver, I swear to only 2 sips. (Can’t vouch for Mike though.)

The “ qvevri”   is a revitalized tradition in winemaking. These flat bottomed, clay amphora-like vessels vary in size from 50 to 1000 gallons

Internally coated with beeswax, they are buried up to their opening with a stone lid added. The qvevri is on the left side and the amphora/qvevri  on the right. George Solomnish  assistant wine maker at Winivera (and the 6th generation in the industry) said the process is long and tedious….but traditional. 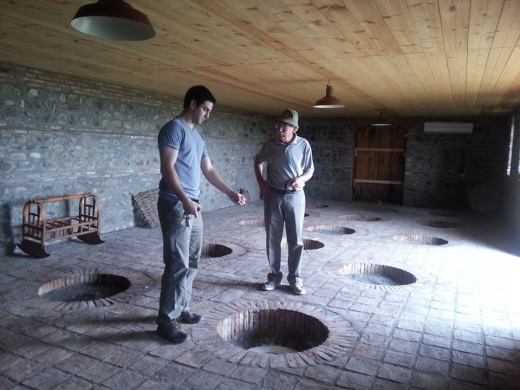 Alex Radzianko, an American working at Pheasant’s Tears Winery, Said  “It gives an unfettered expression of the grape. There’s no wood character…wine, pure and simple.”

At Iago’s Qvevri  Winery, the winemaker not only makes the wine but also the qvevri to put it in.  We had an excellent lunch on the patio…a boisterous bus group was whooping it up in his dining room. (Our driver..me..  bought the wine I liked the best for study that evening,)

We are in the picture studiously trying to figure out how to lift this jug out and clean it.

Schuchmann Wine Chateau, elegant looking and very friendly. We ate an excellent meal on the open air porch and watched  the “pruning  of the vines” going on below us. This German owned restaurant/winery  makes wonderful  qvevri  and non-qvevri  wines and is very popular with tourists.

After eating, Mike and the wine associate got into the serious (?) business of comparing and tasting their wines.

On to the Tuscan-like Sighnaghi, a hill town that is a destination in itself. 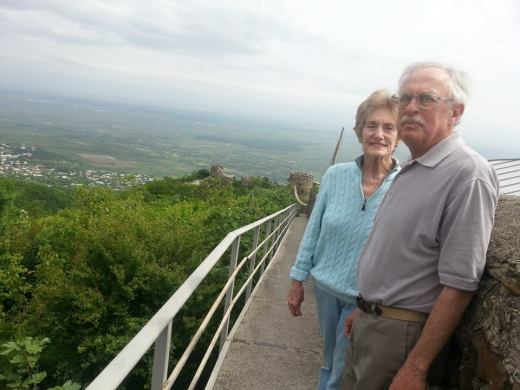 The city, high  on a ledge, looks over the Caucasus Mountains. Irakli  ll, in1772,  built over 2 miles of walls and 28 fortress towers.

We are leaning against one of the walls here and behind us are 2 of the defense towers. The lush Cypress trees and other vegetation have covered most of the walls and towers. The city is reminiscent of an Italian Hill Town with a sloping piazza and large statures. 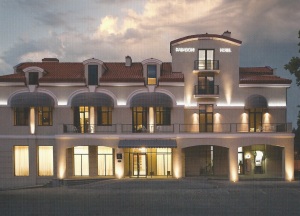 This is the front view of Hotel Kabadoni in Sighnagli for our 3 day stay. I had asked for a balcony with a view and that was the best part of our stay there.

The view from the balcony. A great overview of part of the city and the valley beyond.  After breakfast  we walked down the hill, through cobblestoned alleys, and passing  listing old, wooden buildings to find the fortress wall and defense towers. The Georgians were extremely friendly and hospitable even with the language barrier.

We celebrated our last night with our marvelous guide, Maka Tarashvili, at Pheasants’ Tears Restaurant in Sighnaghi, Georgia. This cosy restaurant/wine bar is  co-owned by vintner John Wurdeman and is very popular with the locals and wine makers. As you can see in the picture, it was very popular with us!

The outdoor patio had seating that climbed the rocks going up the hillside…….which is why we  were eating and toasting inside. Luckily we walked herefrom the hotel. And the food was superb!

The  Hotel Dzoraget , sitting along the Debed River, marks the middle of the mainroad between the capitals of Armenia and Georgia. It  was on our way to Yerevan, Armenia,  and our flight to London.

The desk clerk said “Welcome. We have up-graded you to a suite” and led us to another building.  Three flights up  (no elevator)  to an awkward two floored suite (more stairs) separate from the main building and the gorge. Using last night’s “confirmation” from our concierge confirming “main building, river view” solved the problem. (You can see this in my  cell-phone picture taken from our balcony.) 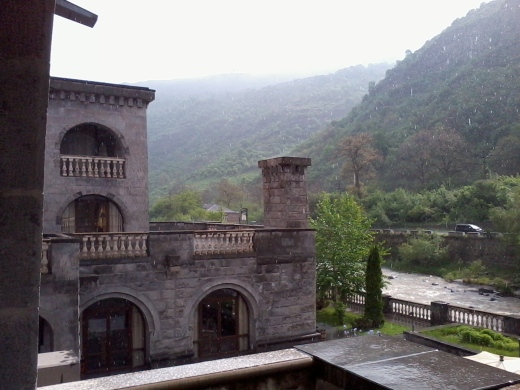 Lovely dinner in the restaurant  and coffee(?)(yes)  out on the patio , watching the rumbling river.  We discussed  reactions to this 2 week trip. What amazed us was how private enterprise has flourished in the 20 plus years since the collapse of the grey period of state ownership of virtually everything. Now thriving,  privately  owned shops, restaurants, hotels and , yes, wineries abound.

In both countries  “color” is back along with a rediscovering of their deep Cultural roots and traditions.

The 6,000 year old wine cave, the fact that enticed me to come on this trip, really does exist!  And here it is.  The only problem: due to its age, and on-going research, no one is allowed in.

Caroline Botwin and her husband Mike are retired educators who have always had a yen for travelling: he with a PH.D and teaching Architectural Engineering plus California wine education, and she having taught high school English, speech and drama. Both wanted to learn first hand about other cultures. While Mike predominately studied buildings and structures and met with winemakers, Caroline hunted for ancient sites and peoples. And kept journals of all their travels.
View all posts by carolinebotwin →
This entry was posted in Georgia. Bookmark the permalink.

5 Responses to Sequel: Georgia, the Soviet collapse and Noah’s Ark