Prague: Survivor of the Nazis and Russians

Researching  before  a trip is good, but it’s still a shock when you arrive. The picture above revealed more about Prague, City of the Czech Republic, than what we had read. Prague, derived from the old Slavic root “Praga” means “ford” and the second one above is the Charles Bridge (1402) crossing the Vitava  River,  the most important connection between Prague Castle (up the hill on the right)  and the Old Town (on the left). This bridge gave birth to the city.

We crossed, heading for Prague Castle. This pedestrian bridge  was crowded: locals, tourists, sellers of all the accouterments  of a popular tourist site. There are 30 statures (1700) of important saints and heroes posted along the sides.

St. Vitus Cathedral (1344) dominates the hilltop and the castle surrounds it. The original castle was built in 1135 (still visible in the basement) while another was built in the 13th century….and another in the 14th. The site is a treasure trove of period buildings and antiquities.

We were greeted by guards at the entrance…but without searches or charge. 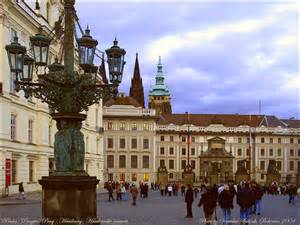 There are numerous squares in this large castle and we only had the time and energy to check out this one, a museum and coffee at an outdoor  café. We decided to head down to the Charles Bridge and the Old Town. 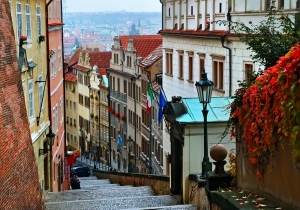 Our return path stepped down steeply through the narrow street with tightly clustered houses  looming  above us. About half-way, we stopped for lunch and a glass of wine…reviving! 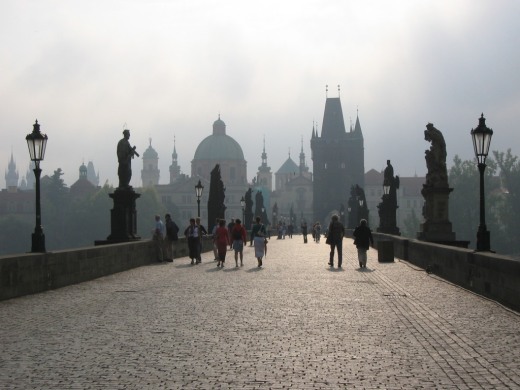 The fog had eclipsed the sun by the time we reached the Charles Bridge and “damped” the number of people crossing. And it was only 4:30.

This square, originally a horse-market in 1348, became the hub of Prague life. In 1919 the Czechs  celebrated their Independence of becoming The Republic.

Later the Square was mobbed with a million Czechs assembled to celebrate their riddance of the Nazis followed by the process of separation from the Soviet Union.  This area with the statue, lights, restaurants and people seemed to reflect their joy!

Rebuilt in 1889 in the Art Nouveau Style with glittering lights and bright colors.

Notice the columns, brown woodwork and arches in the 1st level bar/café. The dining room  above is partially hidden behind the beautiful, arched balcony.

We had an excellent dinner in the upstairs restaurant —where it was difficult to efficiently place the fork in one’s mouth—while staring at the beautiful décor. After wiping our faces, we decided to look at one more square. There was lots of pedestrian activity and many lights. The National Theatre was nearby and well lit.

When the original theatre burnt down in 1881, it had become so vital to the National Consciousness, that Czechs from all walks of life contributed money to rebuilding. In 1868, this picture shows the result of their desire for music, plays, artists and writers. Theaters sprang up all over the country emphasizing the importance of the Czech culture.

Standing by the river, looking up at the top, I thought there were people moving about ….but only statues. Time to return to the hotel and bed…….too much wine with dinner.

The next morning we headed across Wenceslas Square to the National Museum.

This Neo-Renaissance structure, completed in 1890, over looked the square and was fronted by a fountain splashing water over an allegorical figure that symbolized the Czech Nation. If you were there and looking closely at the façade, you would shell marks from the Worsaw Pack tanks from the Prague invasion in 1968. 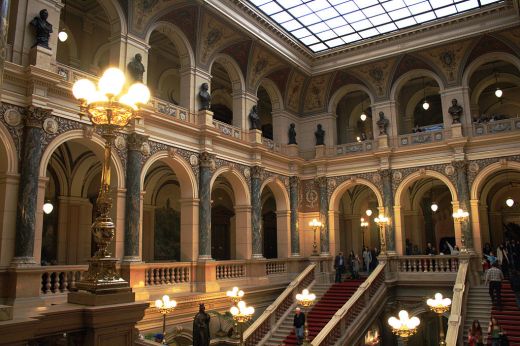 an overhead  skylight! This hall way leads to the Pantheon…which would have been fascinating, but we had more places to go and much to see.

On to the Staronova  Synagogue of the Old-New Synagogue (originally  called the “New” Synagogue until another was built nearby and later destroyed ).

Built around 1270, this is the oldest Synagogue in Europe. It survived fires, slum clearances of the 19th century and Jewish pogroms. It frequently was a refuge and now is a religious center for Jews. It is almost totally surrounded by the Old Jewish Cemetery.

In the 13th century  the Prague Ghetto had been formed by Jewish Tradesmen who settled here . There were conflicts over the following years but the Ghetto grew and became part of Prague. 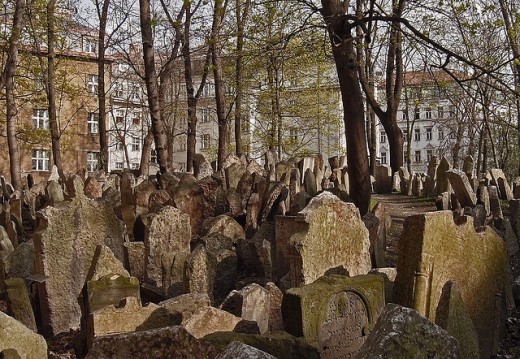 Founded in 1478, this was the only burial ground permitted to Jews. Due to the lack  of space, bodies were buried on top of bodies—up to 12 layers deep. There are over 12,000 gravestones standing, but it’s estimated that there are over 100,000 bodies buried there.

The Jewish Ghetto,  ironically, survived destruction because, although the Nazis destroyed ghettos elsewhere, they wanted to preserve this Prague “collection” as a Museum of the extinct Jewish Race in Europe after the Final Solution had been achieved!!

We were leaving soon, so we stopped by a typical Czech Old Town Square and admired  the enthusiasm and endurance of these people.

Caroline Botwin and her husband Mike are retired educators who have always had a yen for travelling: he with a PH.D and teaching Architectural Engineering plus California wine education, and she having taught high school English, speech and drama. Both wanted to learn first hand about other cultures. While Mike predominately studied buildings and structures and met with winemakers, Caroline hunted for ancient sites and peoples. And kept journals of all their travels.
View all posts by carolinebotwin →
This entry was posted in Czech. Bookmark the permalink.

5 Responses to Prague: Survivor of the Nazis and Russians