Footsteps of the Templars Part 2

Posted on September 14, 2012 by carolinebotwin 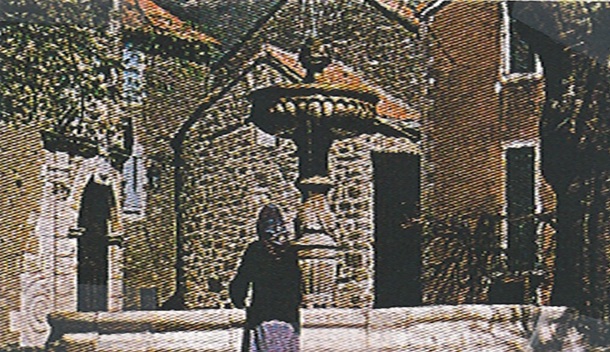 Entering the site originally built by the Templars and expanded by the Hospitallers were 3 floor buildings surrounding a large open plaza centered with a fountain. (see picture) Directly across from the fountain and adjacent to the church was an information center where English was spoken but all the pamphlets were in French. Our abilities with French extended to reading menus, reserving rooms and wanting directions to the bathroom.

Mike’s extensive international wine vocabulary had not yet been necessary in the Laraiac plateau—but there is always hope! Plenty of wine to drink but no local wineries where one could learn about the terror and varieties of grapes used in the process.

St. Edlalie was a working farm town and only just beginning to encourage tourism.

The Templars built the north wing, including a Romanesque Church and the granary tower but the Hospitallers expanded the village in the 15th Century adding a good deal of charm to the austere walled town. The church was typically dark with a single aisle to the alter but the sunny and beautiful plaza beckoned. Passing a lovely stairwell, we walked to the only open side of the plaza where we looked over the low wall and down the valley to the surrounding hills, Some Commanders and soldiers stabled their horses at the nearby site La Cavalerie while residing (with families?) in Sainte Eulalie.

Sitting, drinking espresso, (of course there was a cafe) in this sun-lit bit of antiquity allowed us to envision what life was like here in the 11th through 17th century… and what it is like today as a working farm village. When we left around noon, there were 2 more cars in the parking lot.

This small village is about 8 miles from Ste, Eulalie, along the Circuit Larzac Templier et Hoapitalier route. There was no question that we bypassed Roguefort as the smell permeated the air for miles.

A five story rectangular tower (see picture) dominates this town surrounded by cultivated land and sheep-walks. The tower was built by the Hospitallers in the early 14th century to safeguard the villagers and became a refuge for those displaced from town homes by various conflicts with outsiders or among themselves. Its roof terrace gives oversight to the immense Causse beneath. As we got out of the car we were stampeded by a large flock of sheep following a shepherd driving a tractor. Two hardworking and beautiful Border collies kept the animals tightly knit as they followed the shepherd down the road and into the hills. As urbanites, we were mesmerized by the sight. We also had to watch where we stepped crossing the street.

Adjacent to the tower was a Tourist Information gift shop… beautifully rehabbed inside what was a rock cavern: the original basement of the barn above. Not only did the young women speak English, they had excellent brochures and travel books in our language! (Not to mention postcards and knickknacks… several of which are hanging over our fireplace).

There wasn’t much else to see around this site but this gorgeous shop made up for it. 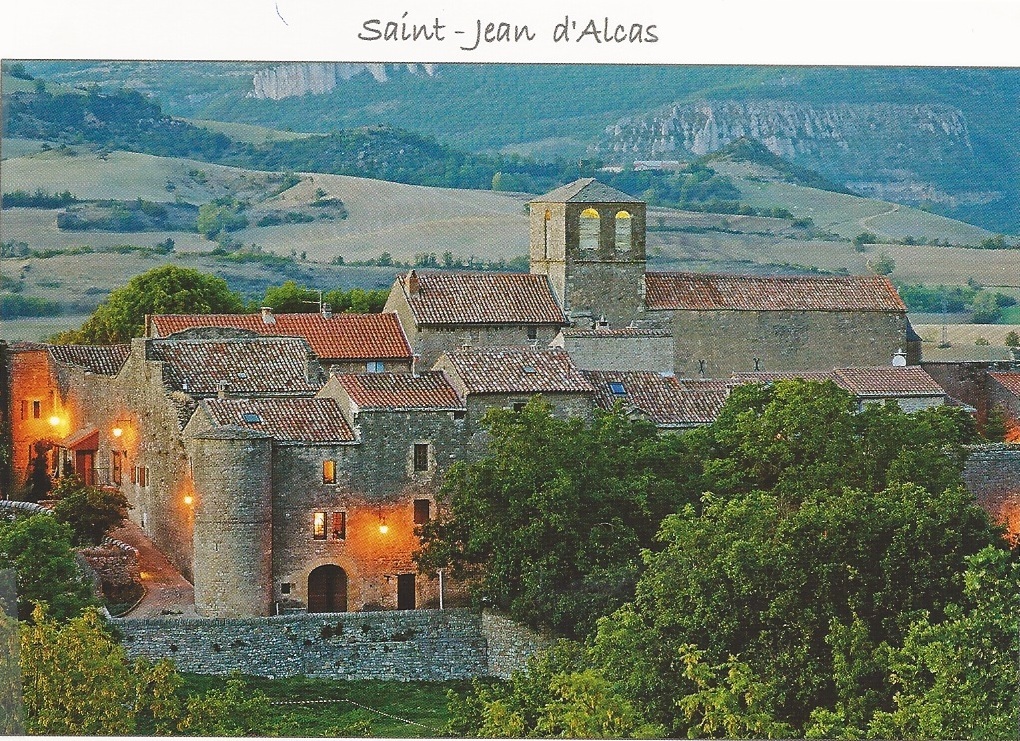 We parked just outside the arched stone entrance to this walled city. There was only one other car in the lot. The rough flattened stones of the main street, only slightly smoothed since the 14th century, but were too rough for modern cars. The first floors of the buildings had the same rocky floors. This was the last and the most attractive hamlet of the Circuit.

The Abbess of the neighboring Cistercian Abby not only oversaw the construction of the village but also ran it for over 20 years. The Abbess adjudicated any problems that arose among the townspeople.

We found a few of the small stores open, they were the size and shape of monastic cells that had been joined together with rocky floors, walls and beamed ceilings.

There were small homes and apartments being rehabbed for sale or rent (much like the other sites) and various shops and cafes beginning to take shape. Saint John was a large, squared, walled village with one main street. In the center was a surprisingly big building with a wide glass entry and passage through the middle. On the right a modern restaurant (closed today) with elongated windows and a carpeted floor. The left side of the walkway supported several rehabbed offices/stores, closed for lunch, much to our regret.

The small single-aisle handsome church was similar to the others on this Circuit: elegant in its simplicity, foreboding in its darkness.

The Information lady recommended lunch at a lovely old hotel restaurant back at Tournenire. We drove through Roquefort this time, fascinated by the Caves in the hillside where the bus people were lining up to enter and by the overwhelming odor of Roquefort cheese. A few miles beyond we spotted the hotel on the left and found only two cars in the lot.

Looking back, I think we would have spent the night in this lovely old hotel in Tournenire and, after eating, popped over to visit the Roquefort fort caves. All of these villages could have used a little more time visiting.

The large reception area had been converted to a restaurant with a glass solarium in front. The antique bar also served as the reception desk.

We chose a table by the window and adjacent to a huge bird cage containing a large multi-striped parrot who chattered throughout our meal. When we responded to him, he shook his feathers and turned his back. The roast lamb special was delicious.

When we left around 3, the parking lot was full.

We decided to head on to Millau and see the new cable stayed-bridge. We found the Chateau de Creissels Hotel, just across the river from Millau, and got a room with a balcony overlooking the river and the town but, most importantly, giving a clear View of the cable stayed bridge with the magnificent 7 pylons that resembled huge sails. They changed as the sun moved toward the West. Breathtaking!

The hotel itself was a very old estate converted years ago. We had driven through the gates into a lovely  green and multi-treed yard where cars park hither and yon under the trees.

The regal reception desk was located between the breakfast room and the elegant living room beyond which was a poolroom—cum—library. That night we ate in the formal dining room, actually below the house on the ground floor overlooking the bridge and the river. We chose the balcony with large stone arches through which we could watch the changing light on the “sails”.

The meal was excellent. Champagne toasts were in order for the end of this segment of the “Footsteps of the Knights Templar”.

We probably won’t be this way again…but there are few adventures that are in your heart and you revisit in your memories frequently… and this was one of them.

There was time left before our return flight from Barcelona and we decided to revisit a small, non-touristy town where we had stayed 12 years before. I reminded Mike of the excellent local wineries and he started packing.

After breakfast we headed off to the Grand Hotel Moderne Pigeon in Limoux, France. A good day for driving being slightly overcast with showers. We arrived at the hotel around 4 and got a lovely room (#6 ) over-looking the street.

The new owner-chef had remodeled and updated the wonderful old classic hotel. The original small parking area in back, off the formal dining room, had been converted to a garden-patio for both eating and drinking when the weather was agreeable. There was a lovely bar/coffee shop overlooking the front street. He had also added an elevator.

We reserved for the formal dinner at 8pm and set off for the central plaza and the old Church by the river Aude. This 10th century Church was small and simple but awe inspiring in its antiquity. There had been many “footsteps” here since the 10th century, but ours would be the last for that day…it closed at 6 PM.

We stopped in the main plaza for a glass of sparkling wine and people watching. The fountain in the center glimmered with the  shifting patterns of sunlight and the bubbly had the same affect on us. Not much had changed in our 12 year absence. Reminiscing was fun.

Our formal dinner began with candlelight and linens. The entree was lamb cassoulet at 48 Euros each. Mike talked the waiter into allowing us to share one order and suggested the price of the wine he was ordering would help compensate the price of a single dinner. The meal began with liver pate and crusty warm French bread: we rated it 4 stars.

After breakfast in the garden, we laid our plans for the day. Really just a single plan…wineries.

Sieur d’Arques, a well respected large co-operative was making wines under their own, and many other, labels. This area is noted for sparkling wine. They contend to predate the Champagne area in making “Sparklers” and more recently for reds. It does not matter to me…I have never met a bubbly that I didn‘t like.

Americans would recognize the name Gallo and one of the wines that they make for them is called “Red Bicyclette” (no translation necessary). They also make wines for, among others, Lafite-Rothschild. I am glad that we did not have to drive far after the tastings!

Dinner was a little lower key that evening. We found a restaurant nearby that served frog legs…something we rarely find in the U.S.