Posted on October 6, 2013 by carolinebotwin

This picture is the entrance-or exit  to Korazim National Park which includes  all of Caesarea.

We saved the Treasure of Caesarea for the last, and it was spectacular. A Saturday with good weather equals crowded. The area was so spread out that the crush  didn’t matter.

This next picture shows the original (excavated) port area. Herod the Great, in 29 to 22 BC, built this magnificent city on the site of an ancient Phoenician port and dedicated it to Augustus Caesar. The Crusaders, in the 12 th century, revitalized the city as a major port.   In the late  13th century, the Mamelukes destroyed all of it. Caesarea was then reclaimed by the sands   until the ruins were found in the 1940’s. It is now one of Israel’s major Archaeological Sites.

Looking more closely at this second picture, you get a good overview of the excavated sites. The original port is submerged.  If you look to the right, you can see the long, curving arm that protects the sunken port. There are choices to view this: swimming/scuba diving or seeing the films. We chose the movie which included the port foundations and parts of sunken ships. Excellent! Finally, looking straight ahead at the same picture, the Roman Amphitheater looks like a brown donut.

This is a more defined view of the fantastic job the Romans did on the 2nd century amphitheater.  Now, fully restored, it accommodates over 4000 people  and hosts operas and concerts. Music…..with a view over the Mediterranean. What a magnificent site.

Next we approached Crusader City and the church.

The deep ditch in the foreground is the end of the 11 mile aqueduct that Herod the Great commissioned to carry water from a nearby mountain.  The aqueduct was built on arches that allowed for a constant influx of fresh water to the city. Magnificent feat! Above the aqueduct is the side view of the temple of Augustus and the Crusader Cathedral which is still being excavated. 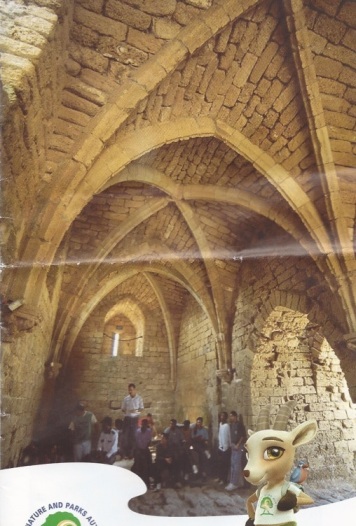 This beautiful, vaulted Cathedral, although smaller than present day standards, is exquisite. The building was dedicated to St. Paul and built on the site of an earlier Byzantine church.  Not crowded inside, only the waves were heard. And no one spoke. Caesarea, backed by the blue Mediterranean Sea, offers the world its staggering, ancient ruins. Successive  phases of occupation have left a treasure trove of archaeological  remains. And all this began in the 4th century BCE.

Caroline Botwin and her husband Mike are retired educators who have always had a yen for travelling: he with a PH.D and teaching Architectural Engineering plus California wine education, and she having taught high school English, speech and drama. Both wanted to learn first hand about other cultures. While Mike predominately studied buildings and structures and met with winemakers, Caroline hunted for ancient sites and peoples. And kept journals of all their travels.
View all posts by carolinebotwin →
This entry was posted in Israel. Bookmark the permalink.